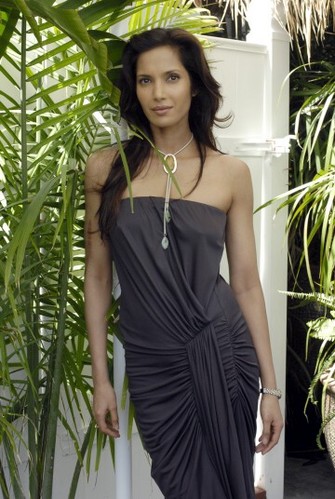 Top Chef host Padma Lakshmi sure knows how to wow the crowd. While she’s not going to win any awards for her cuisine, she gets the men’s vote for her spice — even when she’s just walking on the sidewalk. 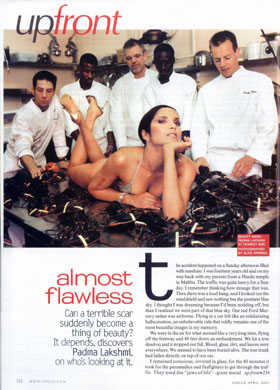 Most men won’t bother trying to be poetic. “She’s Yummy!” they say, of celebrity chef / supermodel / goddess Padma Lakshmi. But they also notice her scar — though the story behind it makes her more beautiful. She got it in a car accident she experienced when she was 14. The wreck was so severe that they had to use the “Jaws of Life” to get her out of the car. When she woke up, she had a 7-inch long scar on her arm.

She was very conscious of the scar and even practiced a pose in the mirror that would let her hide it under her hand and thumb. “But I also knew my scar was a symbol of my survival,” she said.

Many people thought the scar marred what otherwise would’ve been perfect beauty. “Such a shame,” said strangers, “she could have modeled.” When she starred in a college play, the director had the scar hidden under makeup. Later discovered by “Elle” magazine during a trip to Spain, she also hid the scar under makeup — or had it Photoshopped. Microdermabrasion was too painful.

However, photographer Helmut Lang taught her to see the scar as something beautiful. “When he caught a glimpse of my arm, he shrieked, “What have you done?” “Didn’t they tell you about my scar?” I began to panic. “Yes, yes,” he answered, “but why have you erased a part of it? You’ve ruined the beauty of it.”

Today, Padma says she “loves thes car, because it is part of me.”