The sometimes – OK, frequently – caustic travel and food writer Anthony Bourdain has outdone himself in a raw, and lengthy, new Playboy interview.

Never shy, and always outspoken, Bourdain – a former chef himself – has seen much success with his books and a highly successful show on the Travel Channel. He is sardonic in his wit and at times thermonuclear in his opinions – of which he has many. While those may not always be charming qualities, Bourdain is an original and always entertaining. END_OF_DOCUMENT_TOKEN_TO_BE_REPLACED 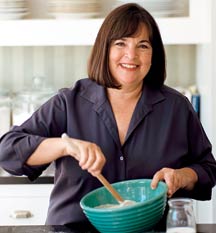 No she’s not a Contessa, and she doesn’t go barefoot. But if you’re wondering why Ina chose that name for her show, it’s actually based on a store she used to own.

Barefoot Contessa is the name of a classic movie from the 1950’s with Humphrey Bogart and Ava Gardner. When I bought the store in 1978, it was called Barefoot Contessa. The former owner is Italian and her family called her the Barefoot Contessa when she was young. It’s about being elegant and earthy which is what we’re about.”

Giada De Laurentiis may seem to lead the glamorous life. She’s a very popular celebrity chef. She has a brand new show on the Food Network called “Giada’s Weekend Getaways” aside from her “Everyday Italian”. She has a thriving catering business, endorses a number of products and is about to release her third cookbook “Everyday Pasta”. With all of that on her plate, her schedule is quite gruelling.

Unlike “Everyday Italian” which is pretty laid back and shot in her kitchen, “Giada’s Weekend Getaways” had this pretty chef hopping from one location to another, from one city to another and checking out some of the hottest places to go. They had her jet skiing, learning to salsa and driving around in a convertible in a single episode. That was the pace of the past eight months worth of work.

It’s a good thing that she and husband clothing designer Todd Thompson have decided to put off having kids for a while. The pace right now is very hectic. De Laurentiis says they’ll probably wait a couple of years before settling down and having a family.

Remember Casey Thompson, one of the most promising contestants of Top Chef? Get to know more about her in this interview, done right before the chef showdown. She didn’t win, but we hope that she’ll be one of the female chefs to truly penetrate the male-bastion that is the culinary world.

Jamie Oliver’s on another crusade… this time attacking not just chicken farmers but bad taste. He told a French magazine that the people in UK are far more interested in getting drunk than in eating well.
“There is a better variety of food in the slums of South Africa than in English towns and cities,” he says. Oooh. Harsh.