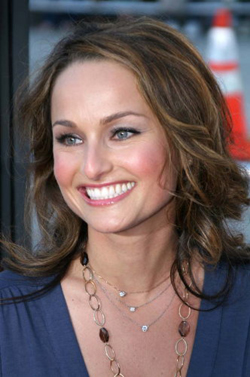 Giada De Laurentiis may seem to lead the glamorous life. She’s a very popular celebrity chef. She has a brand new show on the Food Network called “Giada’s Weekend Getaways” aside from her “Everyday Italian”. She has a thriving catering business, endorses a number of products and is about to release her third cookbook “Everyday Pasta”. With all of that on her plate, her schedule is quite gruelling.

Unlike “Everyday Italian” which is pretty laid back and shot in her kitchen, “Giada’s Weekend Getaways” had this pretty chef hopping from one location to another, from one city to another and checking out some of the hottest places to go. They had her jet skiing, learning to salsa and driving around in a convertible in a single episode. That was the pace of the past eight months worth of work.

It’s a good thing that she and husband clothing designer Todd Thompson have decided to put off having kids for a while. The pace right now is very hectic. De Laurentiis says they’ll probably wait a couple of years before settling down and having a family.