Jason Atherton may not have the boyish good looks of Jamie Oliver, but boy does he know how to run a kitchen. He is the one Michelin-starred executive chef at Gordon Ramsay’s Maze restaurant (and anyone who can survive Gordon Ramsay’s scrutiny has got to have both talent and balls).

He was also the first British chef to complete an internship at Spain’s famous El Bulli restaurant, under Ferran Adrià. Though he’s too busy in the kitchen to have a show, he cooked the winning starter and main course in the 2008 series of Great British Menu on BBC Two, representing London and the South-east. 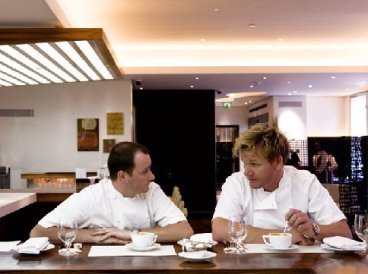 Watch out for “Maze, The Cookbook” this April. It is the first cook book of Jason Atherton, who heads the award-winning restaurant Maze. It contains about 30 of his signature dishes. Atherton is one of Gordon Ramsey’s proteges (he must be pretty darn good to get his attention).