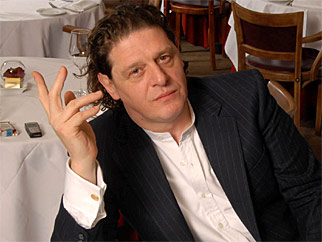 There’s a new star in Hell’s Kitchen. Marco Pierre White is the new host of the show, taking over from Gary Rhodes and Jean Christophe Novelli. Word of this move was leaked last October but only confirmed the other day.

Marco Pierre White is the original super chef and is considered the Godfather of British cooking. He’d actually been retired for several years but was thankfully coaxed back into the kitchen by the network. White says that there will definitely be many changes taking place. He won’t be following in anyone’s footsteps but will definitely be making the show his own. He wants to change the image of the show. He notes that whenever people have spoken of the show, they never talk about the food. He says he wants the show to be inspiring, not a way to belittle people or put them down. He’s got a crew of 10 celebrities to work with on the upcoming season of Hell’s Kitchen.

White is well known in the professional cooking world. He trained many chefs including Gordon Ramsey, who first presented Hell’s Kitchen. When asked why he agreed to do the show, he said, “I am a person who loves my industry very much, and I don’t like the way my industry is being portrayed on TV at this point in time. I think people are capitalizing on it and not showing it for what it really is.”

When asked about Gordon Ramsey, he says that they used to be friends but that they are no longer on speaking terms. He says that he likes to surround himself with people who enrich his life. He has no use for those who have nothing to contribute to it.