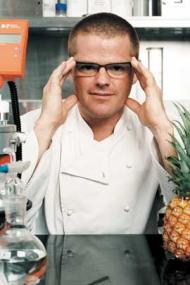 Some people think Heston Blumenthal is a genius. Others think he’s insane. His “cutting edge” cooking techniques include, among others, feeding geese pine needles for 3 months, and then taking the idea of “slow cooking” to an entirely new level by preparing the dish for 5 days.

For some it’s a “new way of cooking” and others take the more pragmatic approach and say that it’s self indulgent. Nobody would ever be able to apply his techniques, and (they add) it’s more about performance, than flavor.

What do you think?