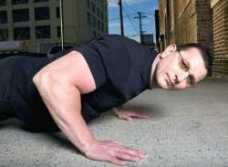 Are you a fan of making the impossible possible? Then you probably love Food Network’s show Dinner: Impossible. Hosted by Robert Irvine, the show is packed with excitement as he struggles to meet deadlines with ambitious goals.

The bad news is that the season will end in August of this year. The good news is that the channel has already given the go signal for a new season. From Monsters and Critics, we get the dish on the chef and his show:

Every Wednesday at 10pm ET/PT, he accepts a variety of missions like an extreme dinner for 200 Winter X Games athletes, preparing odd but tasty combinations of food for 450 Yahoo! employees or taking a gamble on a mission at the renowned casino at Mohegan Sun. Can he complete the task before time runs out or will it be Dinner: Impossible?

Born in England, Irvine began cooking at the age of 15, when he joined the Royal Navy. As part of his service, he worked on board the Royal Yacht Britannia where the Royal Family and their entourages regularly dined.

In addition, Robert participated in a guest chef program, allowing him to cook at the White House.

In his 25 year-long career, he had the opportunity to serve 6,000 servicemen and women on a US aircraft carrier and plan the menu at a spectacular celebrity-studded after-party at the Academy Awards.
Robert also wrote a cookbook entitled “Mission: Cook!” (Harper Collins, 2007). He currently owns his own multi-faceted company, The Irvine Group.

I guess we’re up for more exciting episodes once they finish taping.