If there’s one female chef in the U.S. who has been getting international attention, it has to be White House executive chef Cristeta Comerford. This woman is so down to earth but is very skilled she always stands out wherever she goes. In fact, she has achieved several firsts in her career as a chef. 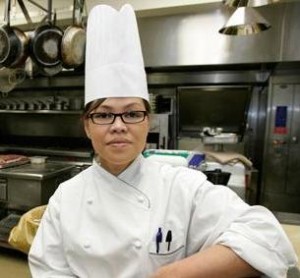 Born in the Philippines, Cris as she’s often called majored in Food Technology at the University of the Philippines in Diliman. She went to the U.S. at the age of 23 and landed her first job at the Sheraton Hotel. Since then, Cris has held a number of positions but being the White House executive chef is the most challenging job she’s had, so far.

Comerford is the first female to hold the White House executive chef position. She is also the first chef of ethnic minority origin in the U.S. holding this post.

It was in 1995 when Comerford was recruited to the White House during the administration of Bill Clinton. She held the post of executive chef after being appointed by then First Lady Laura Bush 10 years after in 2005. Bush apparently was impressed with how Cris handled a large dinner for Indian Prime Minister Manmohan Singh.

Outside of the White House, this Filipina chef is the only female in the Club des Chefs des Chef, considered the world’s most elite group of cuisinaires. This prestigious club with 40 members celebrated last month the 50th anniversary of the German-French post-war reconciliation with a week-long meeting in Berlin, Germany with Cris Comerford in attendance.

Founded in 1977 by Gilles Bragard, Club des Chefs des Chefs is an elite culinary fraternity whose members work for heads of state and royal families. Each year, the members tour a different member country to explore local cuisine, visit farmer’s markets and prepare meals for heads of state. This year marks the group’s 35th anniversary and apart from Germany, the members visited Paris, France as well.