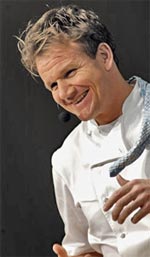 The world knows him as a foul mouthed, mean tempered dictator in the kitchens who just happens to have a talent in the kitchen and a restaurant empire to prove it. His shows Hell’s Kitchen and F-show are titled aptly, most feel. Yet one wonders if this is really Gordon Ramsey or is this all part of the show.

Gordon Ramsey answers the question himself in his new book, Roasting In Hell’s Kitchen. This autobiography gives quite an insight into the man who is in command of this kitchen. Imagine that he himself was surprised when he first saw the first tape of his show. He wondered if he really seemed such a bully. In spite of the way the shows portray him, Gordon Ramsey says he really isn’t that bad. He’s a perfectionist because he wants to be the best at everything he does.

In the book, Chef Ramsey writes about growing up with a father who beat his wife and children. He opens up about the disappointment of losing the dream to play soccer when his knee got injured. He talks of his devotion to his family and the loyalty of his staff. It truly makes Gordon Ramsey very human.

“Roasting in Hell’s Kitchen: Temper Tantrums, F-Words, and the Pursuit of Perfection” is available courtesy of HarperCollins.