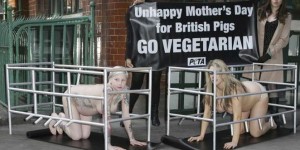 Jamie Oliver seems to be one of the favorite celebrity chefs of various activist groups. This time, he is being targeted by PETA, the well known animal rights activist group. In a demonstration held in front of Jamie’s Italian restaurant in Brighton, members of PETA held placards stating ‘Be Pukka to Pigs: Go Vegetarian.”

The demonstrators didn’t stop at written protestations. One demonstrator, Lynzi Waddington, took it upon herself to imitate a pregnant sow (and she is heavily pregnant by the way), knelt down on the ground inside a metal cage. Apparently, this is one practice that is common in the hog raising industry. Her comment? “Pigs are very sensitive animals, they do feel pain, and they deserve to be treated right.”

What does the celebrity chef have to say about all this? His spokesman said that “The meat Jamie is serving up is very high quality. They should go make a protest somewhere that imports its meat.”

While that does not directly answer the demonstrator’s remarks on “humane” treatment of pigs, it does make sense to me. I might become the target of animal rights activists because of this post but seriously, there is a place for everyone, everything. It’s called the food chain. It is part of life.

While I do not see Jamie Oliver as the perfect person (well he is hunky, I have to say that!), I do not see him forcing vegetarians to eat meat either. So why not leave meat-eaters alone?