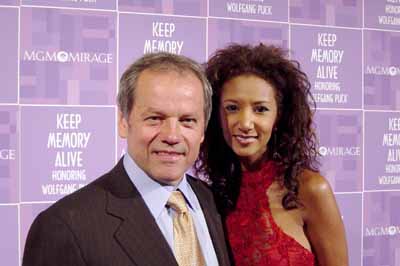 Christmas is the season for giving and receiving and Wolfgang Puck has certainly received a very nice gift this Christmas. He and fiancee Gelila Assefa welcomed their second son last December 18, 2006. They have named the baby Alexander Wolfgang Puck. He weighed 7 pounds and 3 ounces at birth.

Puck and Assefa now have two children together, both of them boys. They named their older child Oliver, who was born in July, 2005.

The Austrian chef also has two other children from his previous marriage to Barbara Lazaroff, his business partner. Again both of the children were boys.

Wolfgang Puck must feel like he’s on top of the world. A new son, loving family and business is going great. The latest addition to his restaurants, Cut, is so popular it is hard to get reservations to eat there!

There really isn’t much more that he can ask for. Now that’s a truly a great way to end the year.
[tags]Wolfgang Puck,baby,children,Cut,restaurant[/tags]