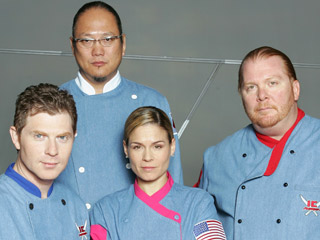 Celebrity chefs often gain fame from having a television show. The term celebrity chef is often seen as derogatory by those chefs who eaned their title through school and hard work. As we all know, it takes a lot of sweat and practice to be a professional chef, cooking for many people none of whom are related to you.

The show Iron Chef gives the celebrity chefs a chance to prove that they aren’t just for show. Iron chef show began in Japan and a spin off was later made called Iron Chef America. In both shows, there are preselected Iron Chefs. These chefs are masters at their craft. In the US, The Iron Chefs are Mario Batali, Bobby Flay, Masaharu Morimoto (who was also an Iron Chef in the show in Japan) and the first female Iron Chef, Cat Cora.

Every week a challenger comes forward. These are chefs with good reputations theselves in the cooking field. They choose which Iron Chef with whom to do battle and then they are given a secret ingredient which they must use in all their dishes.

It is a tough battle with only 30 minutes to make a full course meal. It challenges each chefs creativity and ability to the limit. It is also a great show because it shows that no true chef works in the kitchen alone. He has to have a great team – who themselves are great in their respective areas.

The question is: whose cuisine will reign supreme?