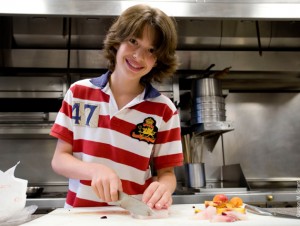 It seems that celebrity chefs are getting younger by the day. Earlier this month, I featured a very young celebrity, Julian Kreusser, who has his own cooking show at the tender age of 5. Today, I just read about another young celebrity chef, albeit a little older. At age 13, Greg Grossman is making a name for himself.

So who is Greg Grossman? He is from East Hampton, New York, and he has been catering since he was 11 years old. The first inkling that his parents had that he was a prodigy was when he served them pan seared scallops under a balsamic vinegar glaze with a wild-mushroom medley way back when he was only 10 years old. The rest, as they say, is history.

I wonder how he acquired his skills. If you ask his mom, though, she would tell you that he “practically teethed at Nobu, Cipriani and the Four Seasons Hotel in Palm Beach.” That probably developed his palate into a very discerning one at this very young age.

However talented he may be, Grossman cannot really call himself an official caterer at the moment. This is largely due to the fact that the law does not allow the issuance of catering licenses to 13-year-olds. More so, we have the issue of child labor. He does, however, go around by the tag of “personal chef.” He is also currently shooting a series which is still to find a home in one of the cable channels. I dare say we will be hearing more from this young chef in the near future.