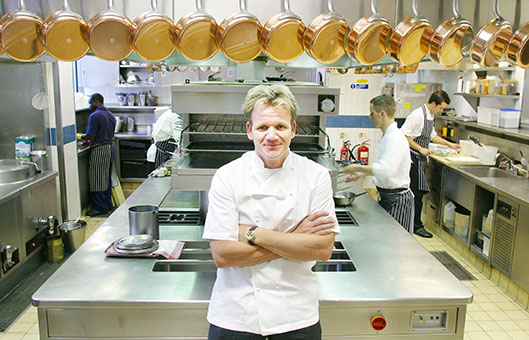 For those of us who love reality TV shows or cooking shows in general, the name Gordon Ramsey is well known. The title of his reality TV show Hell’s Kitchen really catches people’s attention and his temper has left a few people gaping in amazement. Yet, people keep watching this amazing man and so his shows are still on air, in fact you may have caught his other shows The F Word and Ramsey’s Kitchen Nightmares.

He first began working in the kitchens in Harvey’s in Wandsworth, with Marco Pierre White who is Michelin-starred chef. A couple of years later he moved to the Le Gavroche and worked alongside Albert Roux. Three years later he traded London for France and worked in the kitchens of Guy Savoy and Joel Robuchon. In 1993 Gordon Ramsey became chef of the newly opened Aubergine restaurant. It earned many awards and accolades including two Michelin stars within three years.

However, that isn’t all he is. He is also a restaurateur. His company currently owns and operates nine establishments, one of them in Tokyo and another in Dubai. He opened his very first restaurant wholly owned restaurant, Gordon Ramsey at Royal Hospital Road in 1998. It has been ranked 3 Michelin Stars since 2001.

Gordon Ramsey is a fiery tempered man and a perfectionist. He is also a world renowned chef, a man with a great business acumen, a published author, TV personality and restaurateur.