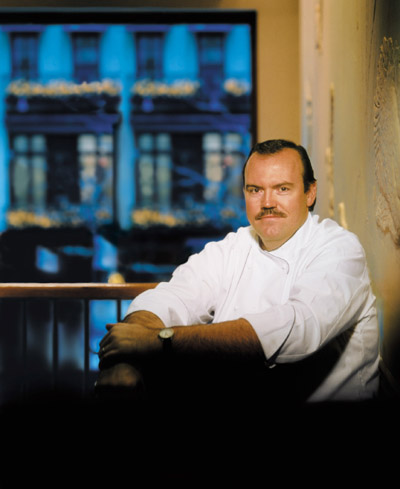 If you want to talk American Cuisine, one of the first names to come to mind is Charlie Palmer. His steaks are a must eat if you are in Las Vegas or in DC. Of course that isn’t all he makes.

Charlie Palmer says he never really planned to become chef. Sports was what he was into. In fact he was a linebacker in high school. Thanks to a dare from a neighbor and working at the Colgate Inn Charlie found his way to cooking.

Charlie Palmer trained at the Culinary Institute of America. His style though isn’t french, it is considered progressive American. As he explains, “I realized that American cuisine was just in its infancy and I spent a lot of time thinking about what the idea of American cooking really meant to me as a chef”.

His distinctive style first began emerging while he was working at the River Cafe as its executive chef. The New York Times rated him three stars.

Now, Charlie Palmer has a great restaurant empire. His establishments include teh Aureole, ALva and Metrazur in New York. In Las Vegas he has the Aureole at Mandalay Bay Resort & Casino and the Charlie Palmer Steak at the Four Seasons Hotel in Las Vegas. He owns a boutique hotel Healsburg in California which is where his Dry Creek Kitchen is located. He also owns and operates Astra and Astra West, beautiful catering and event spaces in New York and Los Angeles respectively.

Don’t think though that he has left the kitchen. This master chef thinks nothing of jumping in and working beside his staff at anytime. He is more creative than ever and enjoying creating new recipes for his guests to savor.

Charlie Palmer has written three cookbooks: Great American Food, Charlie Palmer’s Casual Cooking and the Art of Aureole. He is also a frequent guest on the Today Show of NBC.