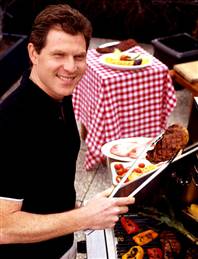 Bobby Flay started cooking at age 17 when he worked in New York’s Joe Allen Restaurant. He so impressed the management that Joe Allen personally paid his tuition to the French Culinary Institute. In spie of the exposure though, Bobby Flay didn’t go into French cuisine. He found his passion in American southwestern cuisine instead.

He experimented with various dishes in his chosen theme from 1988 to 1990 at the Miracle Grill where he was the executive chef, gathering quite a following. He finally opened the doors of his first restaurant in 1991 – the Mesa Grill. The Mesa Grill was chosen as the best restaurant in 1992 by Gael Green. Now, Bobby Flay has three more restaurants. Bolo, which opened in November 1993, serves dishes that have the unique Spanish flavor combined with American ingredients. The second mesa Grill opened its doors in Caesar’s Palace Las Vegas in 2004 and he later opened Bar Americain in New York in the spring of 2005.

In May 1993, Bobby was voted the James Beard Foundation’s Rising Star Chef of the Year. This award is given to America’s most accomplished chef under the age of 30. That same year the French Culinary Institute honored him with the first Most Oustanding Graduate award.

Bobby Flay is constantly trying to enhance his skills. He competed in Iron Chef Japan against Iron Chef Masaharu Morimoto in 2000 which he lost. That didn’t stop him though. He went back for a rematch and won. Bobby Flay is now one of the Iron Chefs in the show Iron Chef America.

Busy man though he is, he has also found the time to write 6 books. His first book, Bold American Food, won the 1995 IACP award for design and has set the style for the next generation of cookbooks. His other books are From My Kitchen to Your Table, Boy Meets Grill, Bobby Flay Cooks American, Boy Gets Grill and Bobby Flay’s Grilling for Life.