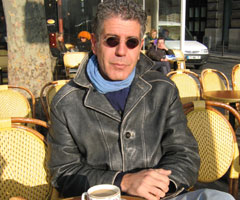 Anthony Bourdain has accepted a challenge from food writer, Michael Ruhlman of Cleveland Heights. He’s gone off to Ohio to find proof of life beyond the world’s largest rubber stamp and cow tipping (if you have no idea what cow tipping is, watch the movie Cars. They call it tractor tipping in the film).

Michael Ruhlman and Anthony Bourdain are actually friends. Ruhlman challenged Bourdain on his blog to come to his hometown, preferably during one of the colder months. The weather may be grim but that hasn’t stopped the celebrity chef or the “Anthony Bourdain: No Reservations: crew from getting there.

What has the celebrity chef been doing? He’s been winter skiing on Lake Erie, visiting the Lake View Cemetery which is where John D. Rockefeller lies buried and taking a tour of the Rock and Roll Hall of fame – the last in the company of Marky Ramone, drummer of the Chef’s favorite band, the Ramones. There’s even a mock drag race set between Bourdain and Ruhlman.

Of course no trip would be complete without food which is why he’s visiting Sokolowski’s University Inn to have some pierogi, checking out the exotic dishes at the West Side Market and trying the kielbasa at the Sausage Shoppe. He’ll also do some cooking with Michael Symon, Lola chef and Owner.

No date has been set yet for when this episode will be aired. Definitely though it brings good publicity to Ohio.