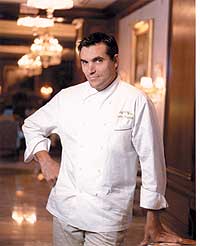 Here’s a new show for everyone to watch out for: Food Trip With Todd English. The Boston Chef has taken a camera crew out with him as he goes out and about discovering new dishes that he will now recreate in his restaurant’s kitchen at the Charlestown Olives, with a special twist uniquely his own.

Sounds like every other cooking show you’ve ever seen? Give it a chance. You might find that though the format is similar to other shows, the content and of course the recipes are unique and definitely worth watching.

Already there are four shows lined up. Each episode is full of information that are really useful and practical. He begins with the episode he calls “Japan: The Freshest Of Fish”. Here he explores Tokyo and suchi. Viewers get to see the Itamae or Sushi chefs at work.

The next episode is “Nantucket: On the Waterfront,” followed by another visit to Japan, this time for “The World’s Best Beef”. The last of the set is set in the Big Apple to bring viewers a peek into what he calls “New York: The Surprise Inside”.
The show is set to air on January 13 at 2pm on WGBH.