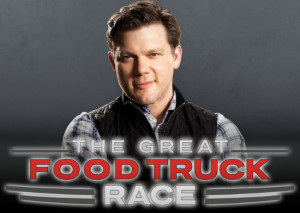 The Great Food Truck Race, hosted by celebrity chef Tyler Florence, is currently on its fifth season on the Food Network. So far, Los Angeles natives The Middle Feast are at the top with their Middle Eastern inspired dishes such as falafel and shawarma. 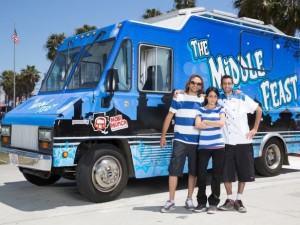 We were somewhat surprised that there were no Asian food trucks on this latest season- the Asian food trucks have always been our favorites to watch from the very beginning, when Vietnamese banh-mi sandwich truck Nom Nom took an early lead in Season 1 and kept winning challenges before they were finally defeated by gourmet hamburger truck Grill ‘Em All.

Our favorites, hands down, in Season 2, were Korilla BBQ, who served up the most delicious-looking Korean barbecue tacos and were pretty much killing it until they were unceremoniously disqualified for cheating in week five- a definite shock and embarrassment to many Korean American viewers.

Season 3 winners Seoul Sausage never addressed the issue of Korilla’s cheating, but everyone felt their fair gamesmanship and victory ultimately shed a more positive light on the Korean community.

And, of course, the final two trucks of Season 4, Aloha Plate and Tikka Tikka Taco were both Asian-inspired. There’s something about the boldness of Asian flavors that seem to translate very well to Food Truck food. We’re crossing our fingers that the next season will feature at least a few Asian food trucks!