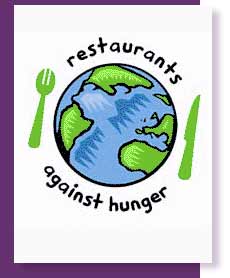 Chefs for Humanity has teamed up with Action Against Hunger, forming a campaign called Restaurants Against Hunger. One of the projects of this new group is the “Save A Life in 30 Days” which begins in April.

The campaign targets diners in 25 cities across the US and Canada. The goal is to use the restaurants to help reduce global hunger by raising funds which will be used to help people during emergencies and to help create solutions to prevent hunger that are long term. They also aim to provide people with a means to have safe drinking water.

President of Chefs for Humanity, Cat Cora, says that they “join the hunger campaign with great excitement. Restaurants are such a great place to ask people to give a little back for hunger after their fine dining experience.”

The campaign Restaurants Against Hunger is set to run from April 10 up to May 9, 2007. More than 250 restaurants have already committed to take part. A Restaurants Against Humanity Celebrity Gala has been set on April 12, 2007 to kick off the event. It will be held in New York City and have food from some of the finest restaurants of the city as well as live music and an auction. The council of Chefs of Humanity will definitely be taking part. This includes, Rick Bayless, Bobby Flay, Gale Gand, Katie Lee Joel, Ming Tsai, and of course, Cat Cora.