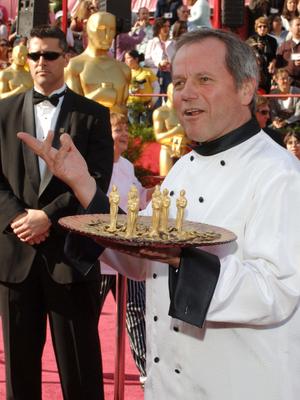 For the 13th year, Wolfgang Puck is the man in charge of the kitchens for the most important gathering. The post-Oscar party at the Governor’s ball is where most of the stars will gather after the awards show and they are usually hungry. After all most of them don’t eat before the Oscars to make sure that they look great in their dresses – though a few are sure to have had no appetite, waiting to see if they brought home the Oscar.

For the hoard that is due to arrive, Wolfgang puck formed a team of over a thousand people to prepare the feast for the party. It was a necessary move in order to be able prepare everything on time. What was on the menu? Nothing but the best. Kobe beef is on the menu. There will be Chinois lobster and smoked salmon. Don’t forget the organic vegetables that are stir fried perfectly.

Then there is the dessert table. There is something for everyone. Brownies, pistachio squares, lemon bars and of course, chocolate, lots and lots of chocolates.

Here’s the recipe for the Spiny Lobster Shanghai Style with Crispy Spinach courtesy of Wolfgang Puck.

2. Peel the ginger, reserving the peels, and cut it into fine julienne strips. Cut the peels into coarse strips and set aside.

3. In a small saucepan, cook the ginger and garlic with ˝ cup of the plum wine and the rice wine vinegar until 1 tablespoon of liquid remains. Remove from the heat and reserve.

4. Place a heavy heatproof 12-inch skillet over high heat until it is very hot. Add the oil and heat it almost to the smoking point. Carefully add the lobster halves, meat side down. Cook 3 minutes. Turn the lobster over and add 1 tablespoon of the butter. Continue to saute until the lobster shells get red and the butter is nutty red. Transfer the lobster to the oven for about 10 minutes, or until the lobster is just cooked. Remove from the oven, remove the lobster from the skillet and keep warm.

5. Add the scallions, ginger peels and curry powder to the skillet. Saute the mixture lightly for 10 to 15 seconds, then whisk in the remaining plum wine and the white wine, stock, chili flakes and the vinegar. Reduce the liquid to ˝ cup. Add the cream and reduce it by half. Add any liquid from the julienne of ginger, then whisk in the remaining tablespoon of butter. Season the sauce to taste with salt and pepper.

6. Crack the lobster claws with the back of a large chef’s knife. Arrange the lobster halves on a warm oval platter, meat side up. Strain the sauce over the lobster, then sprinkle the sweet ginger on top. Garnish with Fried Baby Spinach Leaves (recipe follows).