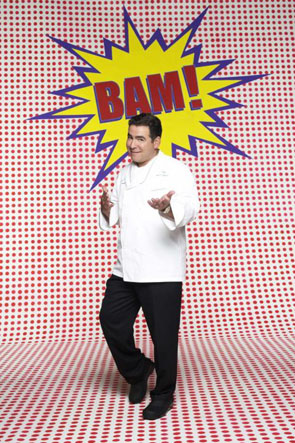 Bam! Kick it up a notch and Pork fat Rules! are just a few of the catch phrases of Emeril Lagasse. His light and fun style of hosting his TV shows has made him a very popular chef/host. He began with then new cable station, Food Network, in 1993 with the show “How to Boil Water”. Now he has two shows, “The Essence of Emeril” and “Emeril Live!” plus he is the food correspondent of “Good Morning America”.
Emeril Lagasse received a full scholarship to the New England Conservatory of Music but his heart was in a different medium – Food. Not surprising since he began learning about cooking at a very young age from his mother. In his teens he worked in a Portuguese bakery till he went off to College at the Johnson and Wales University to earn his degree in the culinary arts. He was later awarded an honorary doctorate degree by his alma matter.

Emeril Lagasse traveled to France and polished his skills in French cuisine before coming home. He worked in fine restaurants in New York, Boston and Philadelphia before he moved to New Orleans to become the executive chef of the Commander’s Palace for eight years.

Aside from being a chef, restaurateur and TV personality and host Emeril Lagasse has authored 11 Cookbooks. The first was “New” New Orleans Cooking and the latest is Emerils Delmonico.

He also has a line of high quality stoneware with Wedgweood, a line of seasonal produce, lettuces and herbs with Pride fo San Juan and a line of clogs with Sanita clogs of Denmark.

He also established the Emeril Lagasse Foundation in 2002. Its mission is “inspire, mentor and enable all young people, especially those from disadvantaged circumstances, to realize their full potential as productive and creative individuals” . It is another dream fulfilled for him since he has always wanted to enrich children’s lives. Truly he kicks things up more than a notch.