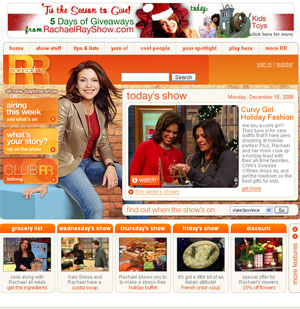 Rachael Ray has surely come a long way. She’s gone from teaching how to cook in the supermarket to making 30 minute meals on TV to having her own full one hour show. Not bad for a girl who simply loves food.

How did she do it? She just did what she’s always done, talked and cooked. Her personality, energy and boundless curiosity, though was what caught the eye of the Queen of Talk herself, Oprah Winfrey, whose production company, Harpo is behind Rachael Ray’s show. Oprah was even a guest on the show, but not on the first day.

As Rachael Ray puts it, it’s nice to actually have an audience instead of just talking to the camera and crew. The audience seems to really enjoy her show, especially with all the food that she serves. For those who can’t be in the studio, she at least has a great website. She even has her grocery list available so that you can go out and buy everything you need to cook along with her.

The show is about more than just cooking. She talks about various things such as weddings, fashion, shoes, etc. On the first day of her show, she and a fan went skydiving together, which was of course filmed before the show.

Make sure to catch the show. It is fun and light, part talk show, part cooking show. Definitely it is all Rachael Ray.