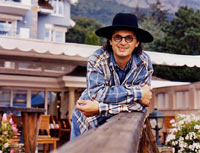 You donâ€™t know who Marc Veyrat is? He is a French celebrity chef â€“ and yeah, the French know all about good food! â€“ who is known for his forays into the countryside to gather wild herbs to incorporate into his excellent dishes. Late last month, news reports spread like wildfire that the celebrity chef is â€œquitting the kitchen.â€

His restaurant, La Maison de Marc Veyrat (more popularly known as L’Auberge de l’Eridan) is closing down, much to the dismay of many. Unlike other chefs, who are closing down their shops because of the credit crunch, Veyrat cites health reasons for this closure. He is quoted as saying â€œI am stopping work in Annecy because physically, I have to, following a serious ski accident three years ago.â€

The restaurant is located near Annecy and has earned 3 stars in the Michelin Guide. It was opened by Veyrat in 1992 and is best known for its traditional dishes infused with lots of wild herbs. Veyrat also introduced the concept of â€œmolecular gastronomy.â€ This concept is basically the use of chemistry in coming up with unique recipes. That is, chemistry inspired the chef to put his own twist to various kinds of dishes, making them one of a kind.

Sad to say, that era seems to be coming to an end. Veyrat says that perhaps, the restaurant will make a comeback in the future but if it does, it will certainly be transformed. Still, the good news is that he says he might come back if he becomes fit again.