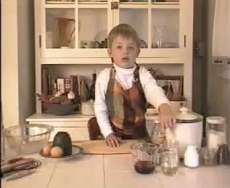 Who is your favorite celebrity chef? I bet that I would get tons of different answers from each of you. More so, I bet that all of them would be at least 30 years old. I would even go as far as to say that no one would be less than 20 years old, much less someone who is 5 years old.

But yes, there is a celebrity chef who is aged 5! His name is Julian Kreusser and boy, is he cute! At this very young age, Julian says that he has always dreamt of having his own cooking show, well, at least since he was four years old. Now that he is five, his dreams have come true. Talk about getting your wish!

Julian is the host of The Big Kitchen With Food, a TV program that is shown over the Portland Community Media. True, it is not The Food Network or some other big cable channel, but hey, how many 5-year-olds can say that they have their own cooking show?

I have never seen his show, but Sylvia McDaniel, the executive director of Portland Community Media, says that viewers are loving Julian and his show. She says that in spite of his age (did I mention that Julian is only 5?), he actually understands what he is doing and is not simply following orders.

What can I say? I have to see this show. Heck, I can’t even trust my 8-year-old brother to make me a scrambled egg yet!