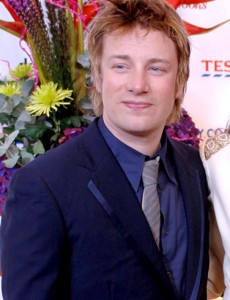 This guy will never have his full share of controversy, will he? Jamie Oliver had the honor of serving the leaders of the world during the G20 summit in the UK, and this is what he had to offer them:

Starter: Organic Scottish salmon with samphire and sea kale, and a selection of vegetables from Sussex, Surrey, and Kent.

There are some things there that I am not familiar with, like samphire and lovage (ah, spank me!), but all in all, the menu looks fabulous to me. But no, some people are quite unsatisfied with the menu, saying that it is not representative of what British cuisine has to offer. Chef Yotam Ottolenghi, in particular said:

The first impression I get from this menu is that it’s extremely British and very politically inoffensive. I don’t think it’s terribly exciting, but then I don’t think it should be on an occasion like this, when Jamie is trying to satisfy so many people.

I would have liked to have seen a few subtle multicultural influences in the menu to reflect modern Britain. It’s a very northern European menu and it doesn’t represent the very strong south-east Asian influences that do exist here.

Some of the foreign guests might raise an eyebrow to the idea of mint sauce with lamb, but as long as Jamie keeps it fresh and doesn’t make it vinegary, like some of the shop varieties, people won’t find it offensive.

Who finds mint lamb offensive? Maybe vegetarians? Anyway, from what I heard, the dinner went off quite well.