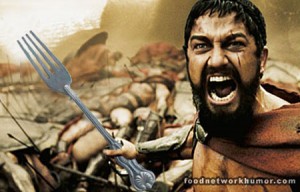 Yes, it is a fork, literally. Celebrity chef Tyler Florence has been operating a cookware store for about a year now in Mill Valley. Dubbed the Tyler Florence Shop (no mistaking who owns this store!), the shop has had a signature fork as its storefront symbol. There is nothing ordinary about this fixture â€“ it weighs a hefty 50 pounds!

Early this month, the police received a report that the 50-pound fork was missing. This was on the 10th of June, although the employees already noticed that it was missing about two days prior to the report. (Well it would be kinda hard NOT to notice a missing fork that big, donâ€™t you think?) Anyhow, they thought that it might have been a school prank so they didnâ€™t think much of it in the beginning.

Now, the missing fork is causing quite a stir, with celebrity chef Tyler Florence himself appealing to people over Twitter. He even offered a reward to whoever finds it and returns it!

The celebrity chef, as much as he might be missing his fork, is not so dense as not to see the humor in the situation, though. Together with his wife, Tyler continues his search for his fork but also welcomes the laughter that it occasionally brings. Indeed, where else have you heard about such an online buzz about a missing fork?

So, if any of you have heard about or seen this fork, let the chef know. Youâ€™ll make him happy AND get a reward for it too!