When I saw this book written by 30-minute-meal-maker Rachael Ray, I immediately thought of those travel guides used by backpackers. When I lived in London in my college days, backpacking friends would pass through the city and stay at my flat, and every single time they came with a copy of “Europe on $20 a Day”.

So back to Rachael’s $40 take, which is less of a travel guide and more of a companion to her tv show of the same name. In the show, Rachael packs her bags and bids goodbye to her sunny kitchens at the Food Network and travels in search of the best eats for $40 a day.

Although Rachael travels the world in search of gourmet meals on a tight budget, most of the venues are in the southern Atlantic coast and Northeastern parts of the US. Abroad, she does visit obvious foodie countries like France and Italy.
There are a few recipes of pretty basic recipes (think clam chowder and french toast), and although the book does not have an index (my other bone of contention with her “30 Minute Meals” cookbook), the restaurants are grouped geographically which makes things somewhat simpler.

In general, this book picked up mixed reviews. Most of the people who bought it were fans of the show (or of Rachael) anyway and thought the tips and photos to be great – but if you were expecting a recipe-worthy cookbook or a concise travel guide to restaurants, you’d probably be disappointed. 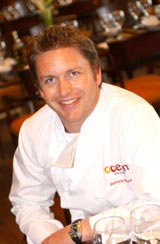 Cooking up the latest news, recipies and food tips from the world’s celebrity chefs!