And it is not just him, apparently! It seems that the British public is becoming increasingly bothered by how much the F-word is being used on the telly. Oh, and I am not talking about â€œFâ€ as in â€œfowlâ€ but â€œFâ€ as in the other foul word. The National has a write up of this today:

A backlash has emerged in Britain against the amount of swearing now common on television and radio.

For years, there has been a progressive increase in the use of bad language in popular programmes, particularly among comedians, talk show hosts and, for no apparent reason, celebrity chefs.

There were a lot of personalities mentioned in the article, including the recently infamous duo of Russell Brand and Jonathan Ross. There were no other celebrity chefs mentioned except for Jamie Oliver, who was said to have used the F-word 23 times in a 50-minute episode.

To be honest, I never really noticed this! Perhaps the episodes that I have seen were â€œclean?â€ Or maybe they were edited. Another possibility â€“ I have become so immune to hearing that word that I do not even take note when it is mentioned on TV.

It does not matter â€“ the fact is that for once, I agree with the critics. There is no reason for celebrity chefs to be using the F-word in their cooking shows. Although I have to admit that I have probably used it on several occasions while working in the kitchen. Poor Jamie Oliver, always in the middle of these controversiesâ€¦

Who is the sexiest chef on TV today? If you were to ask the women in UK, they would probably say Gordon Ramsay. At least, thatâ€™s what the polls have shown. One Poll carried out the research last month and announced the results late in November. In The News has this report:

The F Word host and richest chef in the world topped a poll of TVcooks voted for by more than 4,000 women.

Though tabloid reports recently emerged claiming Ramsay has been cheating on his wife for seven years, his alleged infidelity seems not to have dented his sex appeal among female fans.

A spokesman for www.OnePoll.com, which carried out the research, said: “We weren’t surprised that Gordon came out on top.

“Women go for bad boys all the time. The fact he’s rumoured to be cheating on his wife for years only adds to his appeal.

“It makes him more obtainable for everyday women on the street.”

A spokesman for www.OnePoll.com added: “Most of the men in this poll aren’t purely chefs. Most of them are highly successful restaurateurs, broadcasters and TV personalities.

I do not agree with the results â€“ I think that Jamie Olivier has more sex appeal than Gordon Ramsay but then that is just me talking. Who is the sexiest chef for you?

He may be at the top in the reality TV show Top Chef but Tom Colicchio does not seem to be on top of his game when it comes to real life. Colicchio opened his restaurant Craft in New York in 2001 and has since then widened his horizons by opening other branches in different parts of the States.

On Friday of this week, however, a former employee of Calicchio file a lawsuit against him. The complaint? It seems that the Top Chef star has been remiss in giving his workers their due. Included in the complaint are violations such as not paying minimum wage, overtime, and tips from customers.

The complainant is a certain Nessa Rapone, who worked at the Craftbar in New York last year. In her statement, she declared that she is filing the lawsuit on behalf of the other workers of Calicchio who were paid on an hourly basis. Reuters has this report:

A former employee sued “Top Chef” TV show judge Tom Colicchio in federal court on Friday for allegedly not paying some of his restaurant workers minimum wages, overtime and tips from customers.

Nessa Rapone, who worked at Craftbar in New York in 2007, filed suit in Manhattan federal court on behalf of other hourly paid workers seeking to recover “minimum wages, overtime compensation and misappropriated tips” from Colicchio.

So what does the Top Chef celebrity has to say about the lawsuit? That camp has been silent on the matter so far

Aaah, a chef conspiracy! This article claims that chef Julia Childs was a spy! Or at least, applied to be one. Well, if you can’t beat them… bake for them! 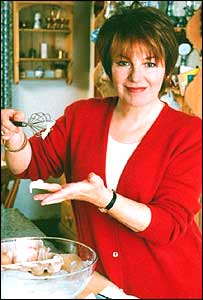 Poor Antony Worrall Thompson. That poisonous plant incident has him the laughing stock of all the celebrity chefs — but it’s not the first time he’s been under fire.

Delia Smith once said of him, “Antony Worrall Thompson is dreadful, just repulsive. I think that Food And Drink, the show that he is on, is the most disgusting programme on television. I will never, ever know, as long as I live, how the BBC or the general public can tolerate it.”

His response: “She’s the Volvo of cooks.” (Gordon Ramsay agrees: “Here we are trying to establish a reputation across the world for this country’s food and along comes Delia and tips it out of a can. That hurts.”)

Well, so does eating a poisonous plant. Read this for other celebrity chefs word wars