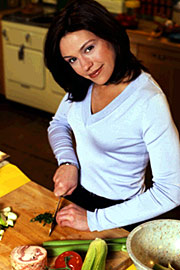 In this day and age, many of us do not know how to cook. Quite a few are afraid to do so because they don’t have any experience or background in it. Even if we buy a cookbook or watch these great chefs on TV, we just don’t seem to get the hang of it.

This is where Rachael Ray came in. She is not a formally trained chef. She has taken no cooking courses. She just loves food and isn’t afraid to try something new in the kitchen. Add to it her perky personality, or as she puts it goofy personality, and she had people willing to give cooking a chance.

Rachael learned to cook the old fashioned way, from watching her mom cook. Her family owned a restaurant in Cape Cod. Later her mom managed restaurants in upstate New York. At home, she enjoyed the flavors of Italy and Louisiana.

Rachael began her career at the Candy Counter in Macy’s New York. She then became the manager of the fresh foods department. After Macy’s she helped open the gourmet market place Agata and Valentina, serving as both buyer and manager.

It wasn’t unitl she moved upstate that Rachel’s destiny began to shape up. She was recruited by Cowan and Label to be their food buyer. While she was there, Rachael decided to hold some cooking classes as a way to increase the christmas sales. Her 30 Minute Meal classes became so popular they caught the attention of the media.

An Albany TV station then asked her to do a weekly 30 minute meal segment as part of the evening news. The show was nominated for 2 regional Emmy awards and Rachael’s first cookbook, a companion to the show, was released selling 10,000 copies.

Now, she hosts 4 shows on the food network: 30 Minute Meals, $40 a Day, Inside Dish and Rachael Ray’s Tasty Travels. She has also signed a contract with Oprah Winfrey and King World Productions to launch her own syndicated talk show, Rachael Ray, beginning September 18, 2006.

She has authored several cookbooks following her 30 minute meal concept and has her own magazine, Everyday with Rachael Ray. She has also developed her own line of cookware and cutlery. 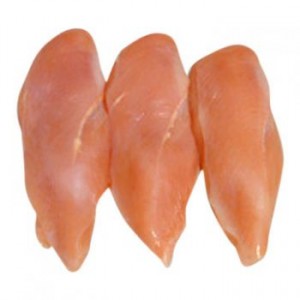 Here’s one more yummy recipe worth trying out, fresh from one of last week’s episodes of Ready Steady Cook, by one of the show’s regular chefs, James Martin.

Perfect for a quick weekday supper and easy enough to whip up when unexpected guests arrive, this is one dish that will please the entire family (just omit the salsa for the little ones and serve it as in the photo above, with greens and pasta).

Method
1. Preheat the oven to 200C/400F/Gas 6.
2. Using a sharp knife, cut a pocket lengthways into the thickest part of the breast. Stuff the pocket with the cheese and fresh thyme and season the breast with salt and freshly ground black pepper.
2. Heat the olive oil in an ovenproof frying pan over a medium heat and add the crushed garlic. Fry for one minute then add the chicken breast and fry until golden-brown. Turn the breast over and transfer to the oven to roast for 10-12 minutes, or until cooked through.
3. For the basil oil, place the olive oil and fresh basil leaves into a food processor and blend until smooth.
4. For the salsa, finely chop the avocado into small cubes and place into a bowl. Sprinkle over the chopped chilli and squeeze over the lime juice.
5. To serve, place the chicken onto a warmed plate. Add a spoonful of the salsa and drizzle the fresh basil oil around the edge of the plate.

1. Place the egg yolks in a large stainless-steel bowl and add the mustard and anchovies. Mix well, then add the ketchup, Worcestershire sauce, Tabasco, and pepper and mix well again. Slowly whisk in the oil, then add the Cognac and mix again. Fold in the onion, capers, cornichons, and parsley.

2. Add the chopped meat to the bowl and mix well using a spoon or your hands. Divide the meat evenly among the six chilled dinner plates and, using a ring mold or spatula, form it into disks on the plates. Serve immediately with French fries and toasted bread points.

Some words of steak tartare wisdom from Tony:

“Les Halles, the restaurant, was pretty much created to serve this dish. The key to a successful steak tartare is fresh beef, freshly hand-chopped at the very last minute and mixed tableside. A home meat grinder with a fairly wide mesh blade is nice to have, but you can and should use a very sharp knife and simply chop and chop and chop until fine. The texture will be superior. And do not dare use a food processor on this dish – you?ll utterly destroy it.” 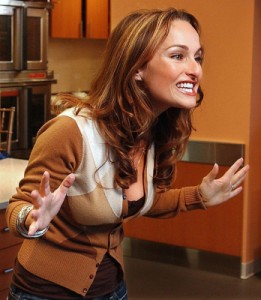 I haven’t met a person who hasn’t said this recipe produced fabulous results. Its mindlessly easy too, so I urge you to try it for yourself.

*note: my sister and I like to temper the acidity by adding a little cream or milk during the last whisk at the end. Also, it is well worth the effort to pound the breasts as much as possible before cooking.

Season chicken with salt and pepper. Dredge chicken in flour and give it a shake to remove excess.

When butter and oil start to sizzle, add 2 pieces of chicken and cook for 3 minutes. When chicken is browned, flip and cook other side for 3 minutes. Remove and transfer to plate.

Melt 2 more tablespoons butter and add another 2 tablespoons olive oil. When butter and oil start to sizzle, add the other 2 pieces of chicken and brown both sides in same manner.

Remove pan from heat and add chicken to the plate.

Into the pan add the lemon juice, stock and capers. Return to stove and bring to boil, scraping up brown bits from the pan for extra flavor. Check for seasoning. Return all the chicken to the pan and simmer for 5 minutes. Remove chicken to platter. Add remaining 2 tablespoons butter to sauce and whisk vigorously. Pour sauce over chicken and garnish with parsley.

I think that you either love or hate True Blood. Itâ€™s one of those things that absolutely have to take sides. Personally, I started liking the series. About midway through the first season, however, I just got so bored! I stopped watching, but I am already thinking of picking up from where I left off. People have been telling me left and right that I should have stuck it out a few more episodes, and that if I had, I would be raving about it now.

Another reason that has got me thinking about watching the show â€“ or at least getting the DVD set â€“ is celebrity chef Tom Colichioâ€™s appearance. In the Season 2 DVD, there are a lot of extras included â€“ as one can expect of any DVD set. I am particularly interested in the segment where the chef makes a drink (blood, of course) for vampires.

The drink is for vampires who do not want to â€œeatâ€ humans simply for ethical reasons. Yup, there are vampires who have given up this habit and stay clear of â€œfree-range humansâ€ as well. So, the chef, who has quite a few friends who are vampires, decided to come up with a solution to the dilemma.

If you want a taste of what the DVD has to offer, check out the video below. Youâ€™ll certainly want to see more after watching the chef showcase his talents. Oh yeah, did I mention that heâ€™s kinda cute? Even if heâ€™s not a vampire.