A lot of cooks would agree that the use of wine in some meals have added a certain spice in making them sought after. Such can be attributed towards the contributions of Chef John Ash, an internationally recognized chef, educator and author. His continued work and application of wine towards cuisine and his evident mastery for winery has been his obvious trademark that has brought him towards world wide prominence.

John is known to hold various classes and teaches culinary schools and institutions with regards to the tricks of the proper use of wine for culinary meals. Majority of his known reliability has been attributed towards the wine industry and such has been something that has continued to push him up towards fame and fortune.

He has published two books, namely American Game Cooking in 1991 and From the Earth to the Table: John Ash’s Wine Country Cuisine in 1996. The latter book was awarded the Julia Child Award for Best Cookbook in 1996 by the International Association of Culinary Professionals.

Ina is just so cuddly and earthy, yet at the same time with a nose for timeless style, that I thought it would be a good idea to post some of her favourite things, as inspiration.

“Some of the other books I use most are Nantucket Open House Cookbook by Sarah Leah Chase, The Loaves and Fishes Cookbook by Anna Pump, Bistro Cooking by Patricia Wells, and Cucina Simpatica by George Germon and Johanne Killeen.”

“Barney’s in New York City carried my stemware for years, but unfortunately, they’ve now discontinued it. But, thanks to one of our readers, we’ve found another source. The name of the glassware is Cristallerie La Rochere, the Amite pattern and the website to order it from is lafermedelamer.com. My glasses are the white and the red wine stemware. They also carry the large water glass and champagne glasses to match.”

“I love All Clad pots. I would recommend you start with small and medium saucepans and 8-inch and 12-inch saut� pans. I don’t even bother with non-stick because if you soak the pans after you use them, they will clean beautifully. I know they’re expensive pots, but you can collect them one at a time. They’ll last a lifetime and you’ll enjoy using them. For Dutch ovens, I prefer Le Creuset. These are all available at Williams-Sonoma, Sur La Table, and Crate & Barrel stores nationally. “

“I use a Krups ice cream maker which I bought at Williams-Sonoma many years ago.” 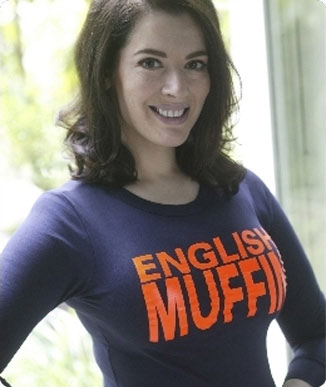 Forget the gingerbread house. Your holiday dessert should be simple to prepare, so you can spend more time with your family (that is what Christmas is about, right?). Here’s a quick chocoalte mousse recipe from Nigella Lawson’s cookbook, Nigella Express: 130 Recipes for Good Food, Fast.

Nigella says that most mousses need to be made the day before, to allow the egg yolk to set. Here’s her “instant” alternative. She does away with eggs, which not only saves time but allows you to safely feed it to young children.

1. Pour the marshmallows, butter, chocolate, and water in a heavy-bottomed saucepan.
2. Melt over gentle heat, stirring occassionally. Remove from heat and let cool.
3 Whip the cream with the vanilla until it’s got a thick consistency. Fold it into the cooled chocolate mixture.
4. Pour into individual dishes or cups and chill until ready to serve. 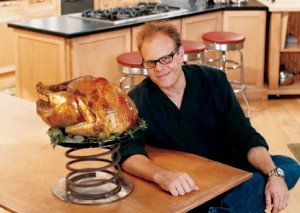 It goes without saying that the turkey is the “piece de resistance” of the Thanksgiving meal, the part of the meal that is most likely to succeed or fail. Therefore, it is imperative to have a fail-proof recipe which not only looks perfect (or close to it), but tastes fabulous as well.

But as with all things in life, nothing, not even the best recipe can guarantee an award-winning roast turkey, as components like your oven and indeed, the bird itself, matters greatly. But by all means, give this one a go and keep on trying until you find the best recipe that works for you.
First in line for what could be the “Best Turkey Recipes Ever” is Alton Brown‘s, which is a rather scientific method of what could be a foolproof way of making a good turkey roast.

Combine all brine ingredients, except ice water, in a stockpot, and bring to a boil. Stir to dissolve solids, then remove from heat, cool to room temperature, and refrigerate until thoroughly chilled.

Early on the day of cooking, (or late the night before) combine the brine and ice water in a clean 5-gallon bucket. Place thawed turkey breast side down in brine, cover, and refrigerate or set in cool area (like a basement) for 6 hours. Turn turkey over once, half way through brining.

A few minutes before roasting, heat oven to 500 degrees. Combine the apple, onion, cinnamon stick, and cup of water in a microwave safe dish and microwave on high for 5 minutes.

Remove bird from brine and rinse inside and out with cold water. Discard brine.

Place bird on roasting rack inside wide, low pan and pat dry with paper towels. Add steeped aromatics to cavity along with rosemary and sage. Tuck back wings and coat whole bird liberally with canola (or other neutral) oil.

Roast on lowest level of the oven at 500 degrees F. for 30 minutes. Remove from oven and cover breast with double layer of aluminum foil, insert probe thermometer into thickest part of the breast and return to oven, reducing temperature to 350 degrees F. Set thermometer alarm (if available) to 161 degrees. A 14 to 16 pound bird should require a total of 2 to 2 1/2 hours of roasting. Let turkey rest, loosely covered for 15 minutes before carving.